The History of the Pouch 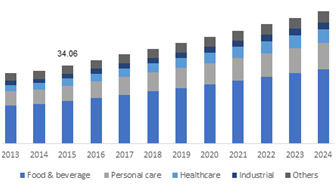 According to Global Market Insights the Flexible Packaging Market was estimated to be worth over 150 billion USD during 2015, and is due to increase by more than 5% by 2024.

With the rise of flexible packaging there has become a high demand for pouches whether side seal pouches or stand-up pouches. Pouches have a number of advantages and are known to be much more resource efficient and cost effective in comparison to other forms of packaging.

Looking at the growth rate of pouches as well as the increase of popularity develops a sense of marvel as to the outset of pouches.

The stand-up pouch became a phenomenon due to its use of materials and features, as well as being customer friendly- leading stand-up pouches to grow further afield.

The original stand-up pouch was invented in 1963 by Louis Doyen the CEO of the French machinery manufacturer Thimonnier, and then gained US Patent 3,380,646 in 1968 for the Doyen stand-up pouch design. This simple Doyen design is created with two flat sheets sealed together along the sides, with a “W” fold (gusset) running along the bottom and then sealed to the edge of the tube with an upside-down U-shaped section. When the pouch is filled the gusset provides a round base for the pouch to stand. The original Doyen design is sealed across the top, however various designs include additions.

The DoyPack was a remarkable stand-up pouch design, however it didn’t grow any further due to the costs compared to flat pillow pouches and other forms of packaging. However In the 1980’s Capri Sun (USA) were leading the market with stand-up pouches for its juice drinks, its sales exceeded until competition had arisen, hitting $100 million in annual sales.

Once Doyen’s patent had expired stand-up pouches became a huge success and were well established in the market, stand-up pouches started replacing other forms of packaging such as cans and bottles etc.

The original DoyPack is still incorporated today, however many come with added features and fitments. The stand-up pouch market is still ever growing with high demand, and is being innovated in different shapes and forms, such as the S Pouch that has a top and bottom gusset by S-Pouch Pack Co. which is a combination of a bottle and a pouch.

Over time we will see many reconfigurations of the stand up pouch, however the original Doy pack will always be a classic.